Details have started to emerge on how Houston Texans’ quarterback Dehsaun Watson’s defense team might fight back against accusations of sexual assault he’s facing.

Watson will reportedly claim that all the massages he received were ‘private’ and ‘professional’ after 22 female massage therapists accused him of sexual misconduct.

‘I’m extremely proud to represent Deshaun Watson and wholly stand behind him against what we believe are meritless allegations,’ Hardin’s statement said.

‘However, we will wait to comment in detail until we’ve completed our review of the numerous, evolving allegations from Mr. Buzbee. We will respond next week and ask you to keep an open mind until we do so.’ Tony Buzbee is a lawyer for the accusers. 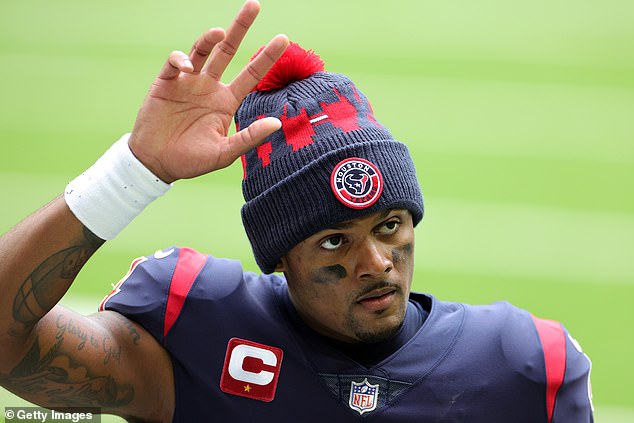 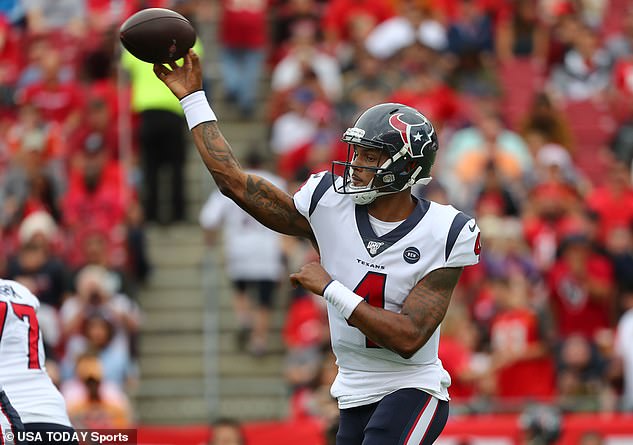 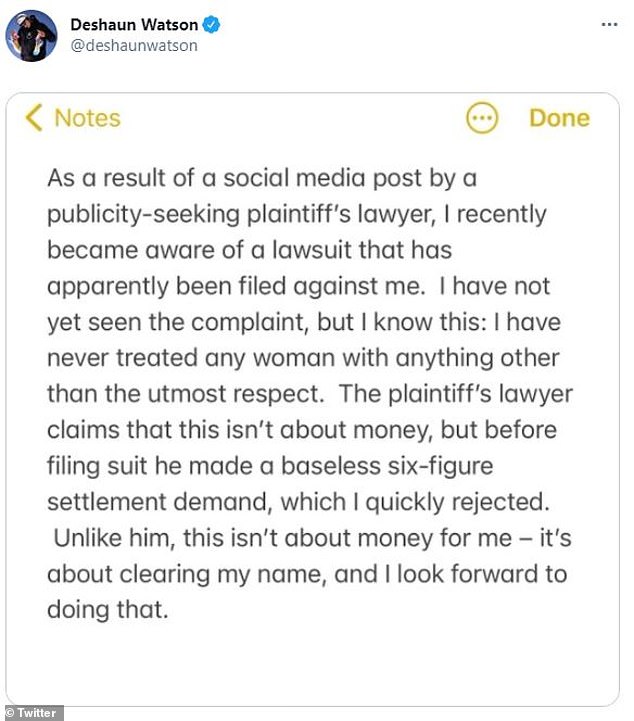 Watson, 25, remains ‘adamant’ that he did not sexually assault any of his accusers, TMZ reported on Saturday.

The NFL star found the women through recommendations from his friends and teammates when his usual massage therapist was sidelined by the coronavirus pandemic, sources told the outlet.

‘He put an emphasis on privacy and spelled out the areas he wanted the massage to make sure the masseuse was comfortable and to ensure things stayed professional,’ TMZ reported.

Sources told the outlet that Watson insists he ‘never crossed the line’ believes ‘they’re being led by a money-hungry attorney who’s looking for a payout.’

The report from TMZ echoes a statement Watson released on Tuesday, in which he called the lawyer filing lawsuits on behalf of the women ‘publicity seeking.’

‘As a result of a social media post by a publicity-seeking plaintiff’s lawyer, I recently became aware of a lawsuit that has apparently been filed against me,’ Watson tweeted.

‘I have not yet seen the complaint, but I know this: I have never treated any woman with anything other than the utmost respect.’

Watson added: ‘The plaintiff’s lawyer claims that this isn’t about money, but before filing suit he made a baseless six-figure settlement demand, which I quickly rejected.

‘Unlike him, this isn’t about money for me – its about clearing my name, and I look forward to doing that.’ 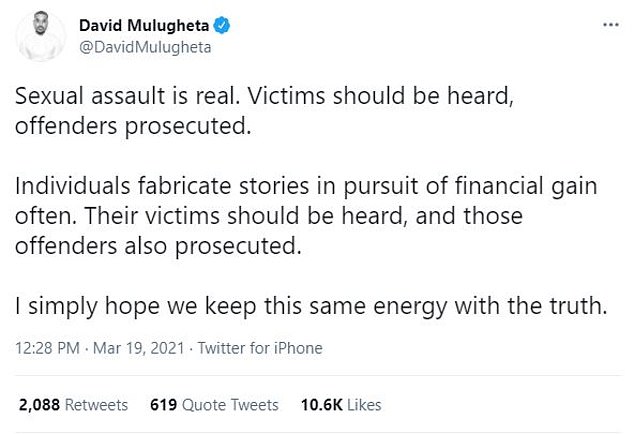 Watson’s agent, David Mulugheta, has also claimed that the accusations were made for ‘financial gain’

His agent, David Mulugheta, has also claimed that the accusations were made for ‘financial gain.’

‘Sexual assault is real. Victims should be heard, offenders prosecuted,’ Mulugheta said in a statement on Friday.

‘Individuals fabricate stories in pursuit of financial gain often. Their victims should be heard, and those offenders also prosecuted.’

He added: ‘I simply hope we keep this same energy with the truth.’ 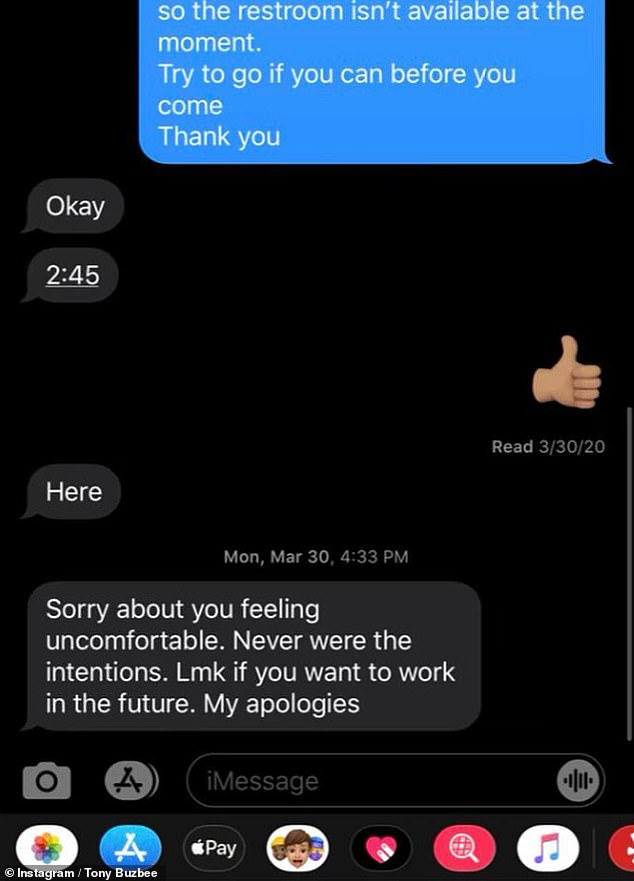 Watson was initially sued for civil assault by two Jane Does earlier this week, but attorney Tony Buzbee says that a total of 20 more accusers have come forward since and now 12 lawsuits have been filed or are in the process of being filed in a Harris County, Texas court.

Most of the women are masseuses who claim Watson exposed himself and touched them with his penis during private sessions, according to the filings obtained by DailyMail.com.

One woman also says he forced her to perform oral sex, while two others say he tried to kiss them.

‘We are now representing 12 women and we will file five more cases in due course,’ Buzbee said at a press conference on Friday. ‘We have spoken to more than 10 additional women.’ 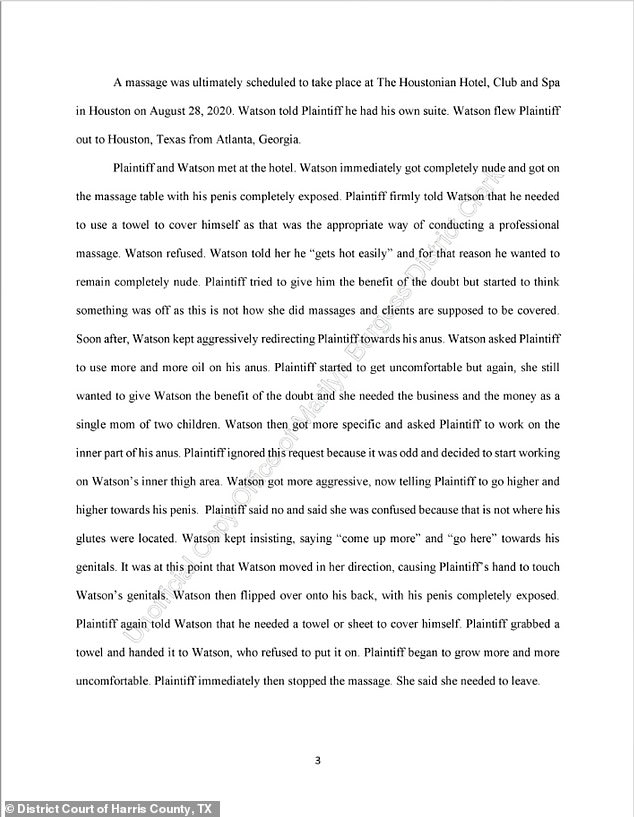 One of Watson’s seven accusers, who is also identified as ‘Jane Doe,’ says he contacted her through Instagram in August of 2020 and arranged for a private session at his Houston-area hotel suite, where he ultimately exposed himself and touched the woman’s hand with his penis. The plaintiff also says he tried to direct her hands towards his anus and even requested she apply oil to the area, according to the filing obtained by DailyMail.com (pictured) 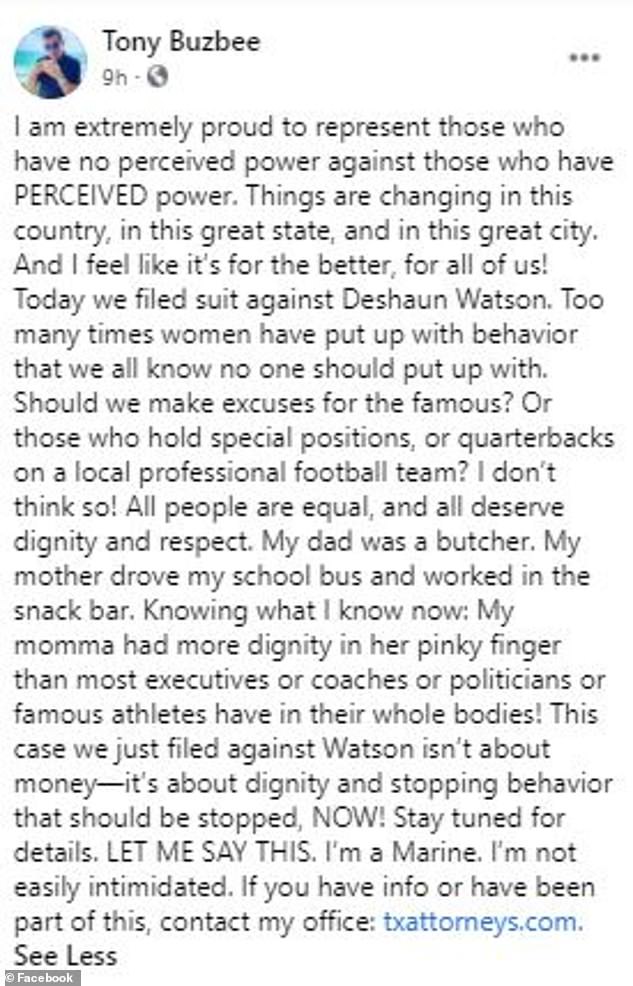 Buzbee wrote on social media that ‘this case we just filed against Watson isn’t about money — it’s about dignity and stopping behavior that should be stopped, NOW!’

The Texans declined DailyMail.com’s request for further comment on Friday, but in a previous statement, a spokesperson simply said the team will stay in contact with the NFL as it conducts an investigation into the claims.

Buzbee also claims to have incriminating text messages from Watson to his accusers.

‘Sorry about you feeling uncomfortable,’ read one of Watson’s purported text messages, which Buzbee posted on Instagram. ‘Never were the intensions [sic]. Lmk if you want to work in the future. My apologies.’

In another text, purportedly sent by Watson ahead of an appointment, he asked the masseuse if she was ‘comfortable with the glute area.’

Each of the seven plaintiffs who have already filed are suing for civil assault and intentional infliction of emotional distress while the woman who claims she was forced to perform oral sex is also suing for sexual assault.

‘Most of these women work in the massage industry,’ Buzbee said. ‘Some work at spas, some work from their homes.

‘These are, for the most part, licensed professionals… Many of them are single mothers; they own their own shop or work for a spa.

‘Seven of these women… are African American, two are Hispanic, and three are Caucasian.

‘Three of them are married, one of them is engaged, and like I said, many are single mothers.

‘All of the cases that we have filed – and we have vetted each one very carefully – allege the same or similar conduct,’ Buzbee continued. ‘Three of the women we represent are undergoing intensive therapy as a result of of the defendant’s conduct.’

One of the women who sued Watson on Thursday said he became aroused during a massage and tried to move in a way to force her to touch his penis.

Eventually, she claims, Watson ejaculated in front of her, prompting the woman to stop the session and leave the room.

Among the other new accusations is an esthetician’s claim that Watson offered her a massage at their first session, which she declined, and later insisted she stayed in the room while he undressed.

He allegedly told her to focus on his thighs and buttocks and eventually flipped back over, at which point he was allegedly erect and completely exposed. She says she told Watson that he was being inappropriate.

At another appointment in October, the esthetician says, Watson asked her to touch his penis and even tried to kiss her before she abruptly ended the session. Watson promptly left afterwards.

Yet another woman who sued Watson on Thursday said he told her that he makes ‘a lot of massage therapists uncomfortable’ and it’s really hard for him to find someone who will ‘meet [his] needs.’

That masseuse said Watson asked to wash before one session, which she said was fine and instructed him to cover up when he exited the shower. However, according to the filing obtained by DailyMail.com, Watson allegedly was completely exposed when he returned and refused her insistence that he put on a towel.

Watson later exposed his penis to the woman several times during the session and even joked that she could move it if it was in the way, according to the filing.

In a filing from Wednesday, Watson was also accused of forcing one woman to perform oral sex on him. She says she never consented and actually ‘blacked out for a few minutes from the fear,’ according to the filing obtained by DailyMail.com.

That plaintiff also says she was so shaken that she defecated and needed to go to the bathroom to clean herself.

His first accuser said Watson contacted her over Instagram in March of 2020 and after arriving at her home, made it clear that he wanted to have a sexual encounter, according to the filing obtained by DailyMail.com.

Watson allegedly guided the woman’s hands towards his genitals at several points during the massage before exposing his erect penis. The plaintiff says he then ‘purposely touched [her] hand with the tip,’ according to the filing.

The woman, saying she was ‘shocked and mortified,’ claims she promptly ended the massage and began to cry.

She also says that Watson made a veiled threat, telling her: ‘I know you have a career and a reputation, and I know you would hate for someone to mess with yours, just like I don’t want anyone messing with mine.’